The worst kind of heartache

When thou passest through the waters, I will be with thee; and through the rivers, they shall not overflow thee: when thou walkest through the fire, thou shalt not be burned; neither shall the flame kindle upon thee. - Isaiah 43:2 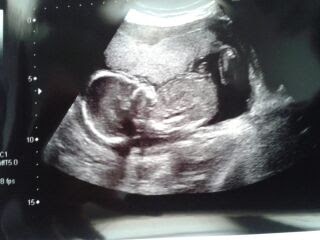 It is with a heavy and tired heart that I find myself once again posting to this blog.   Over the past year it has been my dose of therapy and a way to update family and friends as to how we are doing after the sudden and unexpected stillbirth of our son, Owen at 41 weeks.  I felt, over and over again in those first horrible days how very much I was "in the flood".  Sometimes it threatened to overwhelm me, other times I grasped onto the support I knew God had so clearly provided us to wade through it.

Over the past year I have had my ups and downs....wanting to see God's hand in the loss of Owen, wanting to see some good come of it, knowing that He may not yet reveal what He has in mind and telling myself to be content in Him.  Then, in June, much to our delight, we discovered that we were once again expecting.  It was a pregnancy that I had prayed for even though I knew that it was going to be tough.  Not tough physically, I love being pregnant and feeling those baby kicks and even all the crazy changes that come with it, but tough emotionally.  I will never again go thru a pregnancy thinking that I get to bring a baby home in the end.  Never again will I assume that after that first trimester "all is well".  I knew this was going to be a tough one.  I had no idea how tough this will end up being.

We were cautiously optimistic.  And then....the day of my first prenatal visit, at 7 weeks I started spotting blood and cramping.  This is my fourth baby and I have NEVER had this happen before.  I was terrified.  Didn't God know how much we wanted this baby?  Doesn't He know that the latter part of this pregnancy is going to be horribly emotional for me given what happened to Owen....does the beginning have to be hard too?

To make a long story short, I ended up having 4 ultrasounds during the first trimester of this pregnancy and continued to spot on and off.  The doctors noted a "pool of blood" inbetween the uterine wall and the baby and believed that was the source of the trouble.  Overall they did not seem very concerned about it and felt that it would either continue to bleed out or get reabsorbed into my body at some point.
At each appointment I was a nervous wreck.  This baby's heartbeat has been very elusive, one time even requiring an ultrasound to confirm it.  Since it was at an ultrasound that I was told that Owen's heart was no longer beating,  it was a panic inducing experience to say the least.  So all in all, it has not really been smooth sailing.  My nerves have been frayed on more than one occasion and I know that I am failing miserably at trusting in the One who is the giver of all life.

At some point during the second trimester the spotting seemed to stop and I felt like I might actually be starting to relax and maybe even enjoy this pregnancy a little bit.  I hadn't really said to much about it to anyone, although obviously it you saw me you would know.  I did finally take a deep breath and posted a couple of great pics announcing the pregnancy with the kids onto facebook, which of course, makes it official :)

Then came our 20 week ultrasound on Sept. 24th.  This was an appointment I have been dreading.  I don't know why, I just couldn't wait to see that everything was OK and move on.  Quite frankly, what I really wanted to do was to fast forward to February or March and just see that everything was fine and be done with all the stress.  But, that has not been the Lord's plan for us.  And so.... at our 20 week ultrasound we find ourselves once again in the flood.

The ultrasound showed several abnormalities with our baby.  We got some preliminary findings from our doctor's office and were immediately referred up to Akron Children's Maternal Fetal Medicine Dept. to see a specialist that same day and have a level 2 ultrasound done.  The prognosis is not good and as you could only imagine we are devastated.  My doctor was wonderful, she knew how much we had been struggling and I could tell it broke her heart to have to tell us what she saw and refer us to Children's.

At Akron Children's we saw a wonderful doctor and the team up there was really nice.  We had a very short wait and then met with a genetics counselor to kind of go over what they might be thinking.  The ultrasound showed that the baby (a boy)  has a heart defect, where the lower chambers of the heart are not separated and there is a hole in between them.  Additionally, the main "in and out" arteries of the heart are both on the right side of the heart with a hole between them which causes the oxygen rich and oxygen depleted blood to mix together.  They also noted that one of his kidneys appears to be non-functional and is full of cysts.  They also noted cysts on his brain.  There were a couple of other things that they saw as well, but the overall consensus was that something was terribly wrong with our baby.  The doctor's initial thought was a chromosome defect, most likely  Trisomy 13, 18, or 21.  They would have to do an amniocentesis to test for any of those chromosome defects. They also scheduled us to have a fetal echocardiogram to get a better idea of the issues with his little heart.

In the days that followed I have felt like I have been set loose from my anchor.  I had Derek take me to hospital because I was convinced I had appendicitis after having severe pain in my side for 7 hours in the middle of the night.  Later that day, I thought for sure I had an ulcer, the pain in my stomach was so bad and I hadn't eaten in 2 days.  At 1:30 in the morning that next day I woke up my husband, who was already exhausted from our hospital visit the previous day and just from the heartache of what we were learning, and wanted him to take me back to the hospital because this time I was sure, at 36 years old that I was having a heart attack.  Looking back on it now, I know I sound like a crazy person, but   I absolutely was having a horrible tightness in my chest and the pain was shooting down my arm.  I told Derek I was afraid to go to sleep because I was sure I was dying.  I called over to the hospital and talked to the on call doctor who was really great.  She basically said that I could come to the hospital if I wanted, but she was fairly certain I was having panic attacks.  I'm sure she was right....  I thought I was handling things a lot better than I actually am.  It's been horrible and hard and every kind of sadness.

This past Tuesday we met with the team at Akron Children's and got the "official" word.  Our baby...our son... Josiah is what we decided to name him, has Trisomy 18.  The odds are very high that he will not make it.  The doctors have said that if he makes it to term, he will likely be stillborn or live a very very short time.   Josiah is due February 11, 2013.

We truly covet your prayers as we navigate this new flood in our lives.  Please pray for Josiah, I don't know how long we might have with him.  I don't know if he will make it to his due date.  I don't know if he will be born still or if the Lord would be pleased to give us even a little bit of time with him before calling him home.  Please pray for Braden and Addison...they were SO excited about this baby and it broke our hearts to tell them that we will more than likely not be bringing a baby brother home with us once again.  Pray for us....for Derek and myself, that we would cling to Christ in the midst of this heartache.  That He would give us the words to say to Braden and Addison and that we would find comfort in loving Josiah the best we can while we have him even now. We still trust in the God who holds are things in His Hands.  I don't have the slightest clue what He is doing right now so all I can do is rest in the truth of His promises.  He is with us.  He is sovereign over ALL things.

For you formed my inward parts;
you knitted me together in my mother's womb.


I praise you, for I am fearfully and wonderfully made.

Wonderful are your works;
my soul knows it very well.
My frame was not hidden from you,
when I was being made in secret,
intricately woven in the depths of the earth.

Your eyes saw my unformed substance;
in your book were written, every one of them,
the days that were formed for me,
when as yet there was none of them.
Psalm 139:13-16

For more information on Trisomy 18, we have found this website helpful:

Add comment
Load more...
Newer Post Older Post Home
Subscribe to: Post Comments (Atom)
Isaiah 43:2 "When thou passest though the waters, I will be with thee; and through the rivers, they shall not overflow thee: when thou walkest though the fire, thou shalt not be burned; neither shall the flame kindle upon thee"